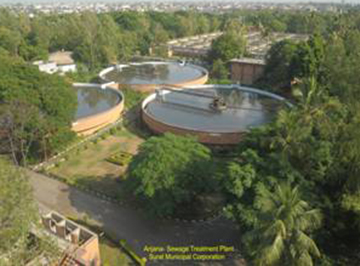 At present, 47.20 percent area has been covered with sewage network serving 84.87% population. The sewage water is being treated as per the norms of Gujarat Pollution Control Board. After treating in a 82.50 MLD capacity sewage treatment plant at Anjana; the treated sewage is disposed off into the Mithi Khadi. Untreated sewage from remaining areas, along with wastewater generated from the local small-scale industries is discharged into the Koyali and Mithi Khadi through storm water drains. However, as per master plan, the sewage from the whole South-East Drainage Zone as well as part of Central Zone will be treated at the sewage treatment plant located at Anjana and proposed sewage treatment plant at Dindoli. The treated sewage will be disposed off into the Mithi and Bhedwad Khadi

The primary sewage treatment plant at Anjana, with a capacity of 25 MLD and 51 MLD capacity was constructed in the year 1958 and 1984 respectively. The secondary sewage treatment plant, based on the Conventional Activated Sludge Process and with a capacity of 82.50 MLD was constructed and commissioned in the year 1996. In 2007, It has been upgraded to meet the latest sewage disposal norms of Gujarat Pollution Contral Board. 0.5 MW biogas based power plant was commissioned at Anjana STP in Oct 2003, which was the 1st in its kind of in India. At Dindoli STP also, the provision is made for the 2 nos. of 0.375 MW power plant with the execution of sewage treatment plant.

As per the master plan, the STP at Dindoli, with a capacity of 32 MLD, will be augmented during 2021-26 in second phase.