The ever-increasing demand of energy and over exploitation of fossil fuel resources has led to several environmental concerns. To counter these environmental problems, Governments, around the world are going in for clean energy technologies, stringent waste disposal system and supporting the energy generation from waste and other non-conventional or renewable sources. Management and disposal of waste, poses an enormous problem, especially in large cities. Utilization of waste for power generation through appropriate technological options is perhaps one of the most appropriate propositions, since it not only generates clean energy but dispose the waste, which otherwise contributes to environmental pollution. This has captured the imagination of both, the Govts. as well as the private organizations all over the world. With the quantities of waste generated by the urban and rural population and industrial units, some industrial units as well as some municipal bodies have initiated action in the area of Waste to Energy.

The national Program on Energy Recovery from Urban ad Industrial Waste and UNDP/GEF assisted project on development of high rate bio methanation processes are being implemented by Ministry of Non- Conventional Energy Sources (MNES) for reducing emission of Green House Gases besides preventing pollution by disposal of untreated waste generated by Urban and Industrial Sector.

During July – 97 MNES invited about 30 representatives from various Local Bodies to introduce this concept, where in only 6 representatives from the Local Bodies remained present. It was principally decided to take up the Waste to Energy Program during the meeting held at MNES, New Delhi. Surat Municipal Corporation was one of the Local Bodies among these six participants. At that time Surat Municipal Corporation was having only two sewage treatment plants under operation. In due course of time Surat Municipal Corporation, MNES and Indian Institute of Science (IISc), Bangalore entered in to MoU (Memorandum of Understanding) for preparing the project report including the aspect of financial viability and also technicality for setting up of biogas based power plant. In such type of Project financial assistance up to 50% of the project cost is being granted by MNES. Surat Municipal Corporation resolved during March-99 to take up the project of bio gas based power plant with assistance of MNES. It was estimated to get more than 1 MW electricity from the two existing Sewage Treatment Plants. As a demonstration project, Surat Municipal Corporation started the process of inviting tenders, etc., for setting up of biogas based power plant at Anjana Sewage Treatment Plant, Surat. After following the procedures for tendering etc., Surat Municipal Corporation entrusted the work of setting up of 0.5 MW electricity bio gas based power plant at Anjana Sewage Treatment Plant to Chemtrols Engineering Ltd.(CEL) , Mumbai during June 2002 at the cost of Rs. 260.46 lacs. MNES also approved this project for financial assistance up to 50% of the total cost during June 2002. The net generation of the electricity from this plant would be about 8000 to 10000 units/day. As per the availability of Bio-Gas, average 3500 units are being generated by this power plant since November 2003. This Plant has been commissioned in February 2004. The average saving in Monthly Electricity Bill is about Rs. 3 to 3.50 Lacs as on today. 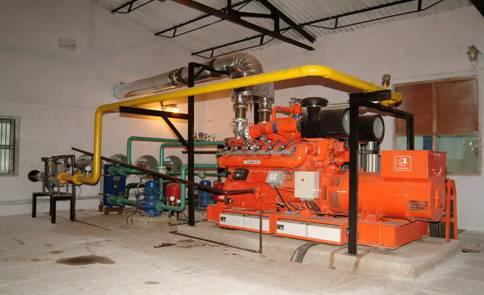 This project is the first project in India, in its kind converting Municipal liquid waste into electricity.

The details of the taken up project as under. The estimated generation of power from 5 treatment facility would be 4.75 MW as detailed below: