Below are the details of the projects which are under planning/Tendering stage:

As directed by Govt. of Gujarat, Detailed Project Report (DPR) for Surat Metro Rail project-Phase-I was prepared by Surat Municipal Corporation through DMRC (Delhi Metro Rail Corporation). Accordingly, DPR with Estimated Amount of Rs.12020 Crores is approved by Govt. of India in March 2019. The proposed Network of Surat Metro (Phase-I) is shown in the map below: 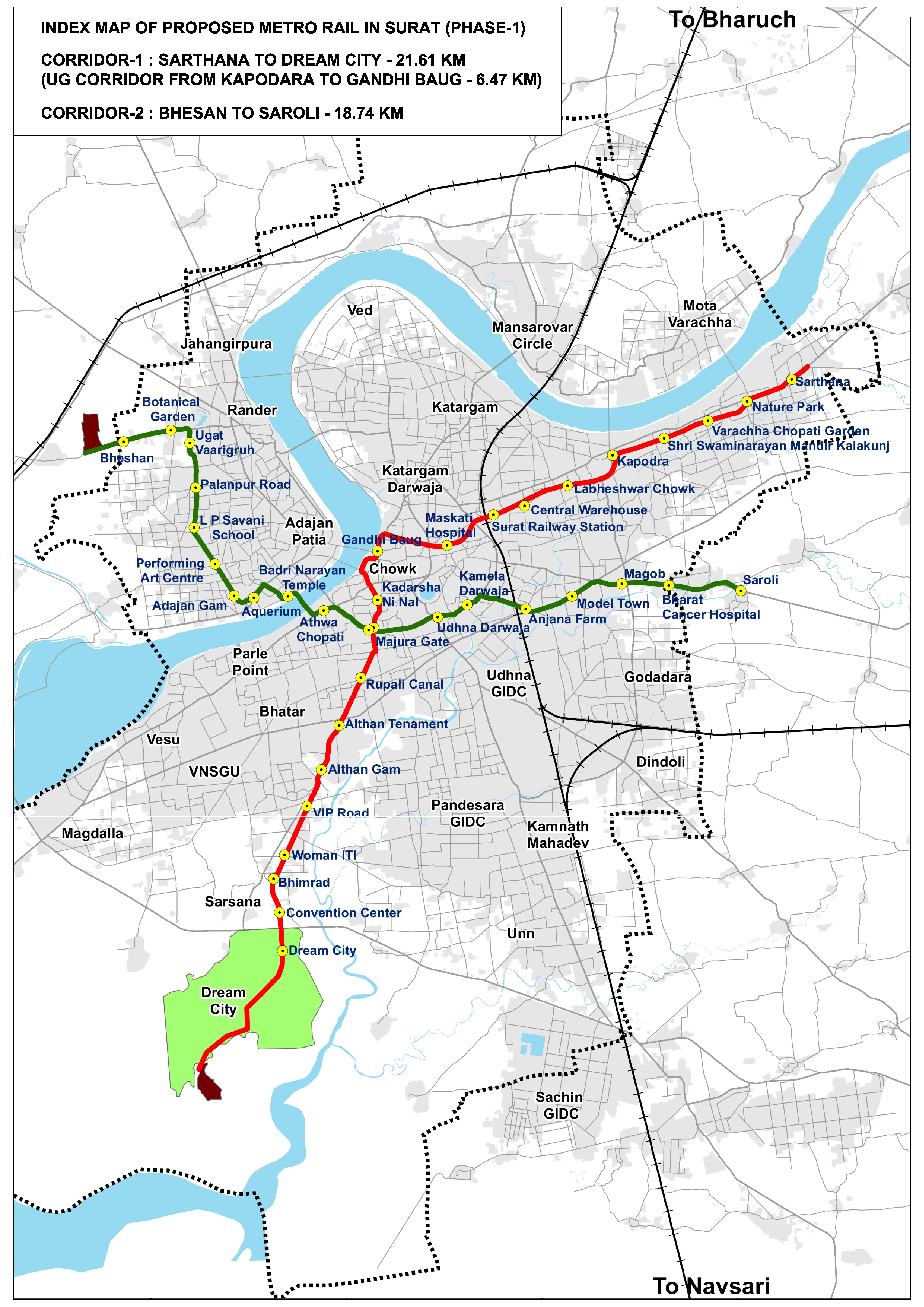 As per approved DPR, total 38 metro stations are planned in 2 metro corridors with total length of 40.35 Kms including underground metro route for 6.47 Kms. Corridor-1 : Sarthana to DREAM city (Khajod) and Corridor-2 : Bhesan to Saroli. Total implementation period for the project is 5 years starting from year 2019-20. As per approval of State Govt., implementation of metro project shall be carried out by GMRC (Gujarat Metro Rail Corporation, formerly known as MEGA) which is a 50:50 joint SPV of Govt. of Gujarat & Govt. of India.

SMC’s present head quarter building built in year 1644 is a heritage structure situated on a very narrow and busy road at Muglisara, near Chowk Bazar, which results in a very heavy traffic during office hours. Due to limited available working space in the existing building, presently various important departments are situated at other places outside main office building.

SMC has decided to construct new high rise office building in the open plot of 22,100 sq.mt. area at old district/sub-jail at Ring Road, allotted by Government of Gujarat for the said purpose. Proposed new office building will accommodate all administrative and engineering departments as well as members of elected wing of SMC incorporating future growth in staff & elected members. Proposed building is envisaged as a high rise structure with unique design features and environmental friendly green building design principles. The site for the proposed office building is under selection process.

Surat railway station is strategically located on one of the busiest railway routes connecting metro cities of New Delhi and Mumbai. It observes heavy passenger flows of around 2.5 Lacs passengers daily and hence becomes a critical point of interchange between different public transit modes. 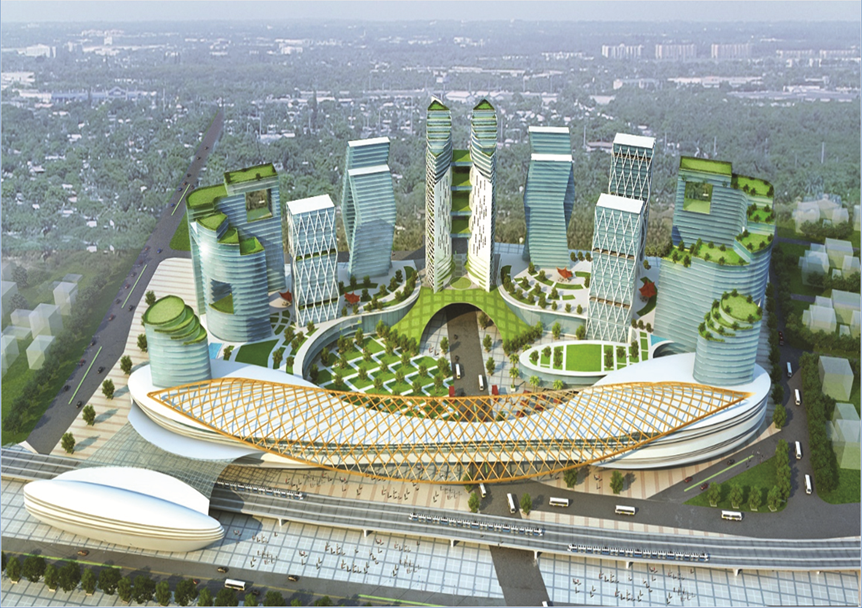 This is the first of its kind of infrastructure development where all the three levels of Government i.e. Central (Railways), State (GSRTC) and Urban Local Body (SMC) are forming a joint venture and pooling their combined land area of about 2.9 Lacs Sq.Mt. to integrate different modes of transport i.e. rail, city bus, metro rail (future), long distance bus services, auto, taxi and private vehicles etc. for the maximum convenience of the passengers through seamless connectivity across all modes and provide international class of travel comfort. This will enhance the common man’s experience and will reduce the overlapping of facilities and provide more compact services with maximum convenience. Conceptual Master Plan of the proposed development has been agreed and all parties have agreed in principle to pool in their land for 90 years lease period for the integrated development of the MMTH. This project is expected to be trend-setter in the country.

Estimated Cost of mandatory part of MMTH project is Rs.895 Crores (excluding cost of commercial development, which will be in developer’s part).Earlier RFP was invited by SITCO in year 2018-19 to develop MMTH Project on DBFOT basis (PPP) but no bidder submitted the RFP.Subsequnetly after review of master plan, RFP will be re-invited by SITCO.

Surat Municipal Corporation had constructed a low height weir across river Tapi at Singapore in the year 1995, 30 km upstream of the confluence with the sea having storage capacity of about 31.01 MCM. The project was undertaken to supplement water supply to the Surat city as well as to various industries situated along the right bank of river Tapi in Hazira area. Due to impounding of the reservoir the SMC has constructed various water works at Sarthana, Katargam and Jahangirpura. The reservoir has also caused continuous ground water recharging of Surat city area as well as reduction in salinity ingress. The top level of the weir is at El 6.00 m which is higher than the high tide level 5.5 m. The length of the weir is 580 m with ungated weir length 486.5 m and scouring sluice length 93.5 m. Crest width is 10 m and FRL at El 5.0 m.

Tapi is a perennial river which crosses over Surat city and serves to a population of approx. 6.5 millions in city. It is a life line of the city. It becomes very dynamic in nature at the end of its course when it meets with the Arabian Sea. It thus brings the saline tidal back flows in city during high/ low tides all the way up to the Singanpore weir. It faces serious challenge of floods for which SMC has planned various flood embankment schemes along the river to accommodate rising levels of floods since 1976. Other issues are discharge of contaminated sewage from storm water outfalls, water management after construction of Singanpore weir and development of slums at river banks which needs to be resolved. There have been many recreational facilities which have been developed on banks of river. Solutions of the issues and previous efforts of development need to be integrated in developing the project. The Tapi Riverfront Development and Rejuvenation Project is an initiative taken up by the Surat Municipal Corporation to develop the Tapi River (for approx. length of 33km from Kathore Bridge to ONGC Bridge) in a holistic and comprehensive manner and increase its asset value for Surat city.

The Concept Master Plan for the project is based on detailed technical studies:

This project carefully examines all the issues pertaining to river and suggests an all-inclusive, immediate and long term solutions. Tapi river front development and rejuvenation project incorporates a comprehensive proposal which is unique and context specific, providing a continuous public realm to the city of Surat. It considers the existing situation of river in context of floods and already constructed flood embankment schemes and proposes a holistic and resilient river edge.

The Concept Master plan is an attempt to formulate a blueprint of a comprehensive, imaginable, legible and resilient river edge enriched with pedestrian trails, visitor facilities, spaces designated and designed for congregation, festivals and performances. The riverfront is proposed to be developed as a green and recreational space that can transform the existing neglected waterfront into a centre for social, cultural and recreational activities in the city. Construction of Embankments to strengthen River Edge of both banks (approx. 33 km on each side) with respect to the level of 50 year of flood return period given by CWPRS.

All the above project components will be taken up for the further detailing as required for the statutory approvals.
Back to Top of the Page